Three sons of our 8th great-grandfather Cornelius Maddox (1651-1705) – James, Edward and Walter – ran one of the inns in historic Port Tobacco, Maryland, before the Revolutionary War.  Numerous court records describe them as innkeepers in the town – once a thriving port, but now mostly overlooked by historians.  Port Tobacco had more than one inn, though, and we’ve never been able to pin the brothers to one specific inn.

I had the good luck of bumping into local Port Tobacco historians Anita Gordon and Sheila Smith at the historic Port Tobacco Courthouse today.  Sheila is a walking Charles County encyclopedia.  Anita and her father are responsible for the only collection of sketches of Port Tobacco’s buildings and layout (called “Port Tobacco, Charles County, Maryland, Prior to 1895”), and she’s now in the process of collecting the history of Port Tobacco’s inns.  Anita is trying to understand how many there were before the Revolution, and who ran them.  I was glad to add the Maddox brothers’ names.

We’re eager to know which of the inns that Jim, Edward and Walter might have run, and what dramas might have unfolded there (Port Tobacco attracted Declaration of Independence signers and other luminaries).  We’ve always assumed they ran the St. Charles Inn (a.k.a. Brawner Inn, a.k.a. Chandler Inn), which was closely affiliated with the Brawner family, since the Maddoxes and the Brawners were intermarried at the time.  But there were at least three inns in Port Tobacco at the time  and none of the inns is specifically mentioned in the Maddox records. 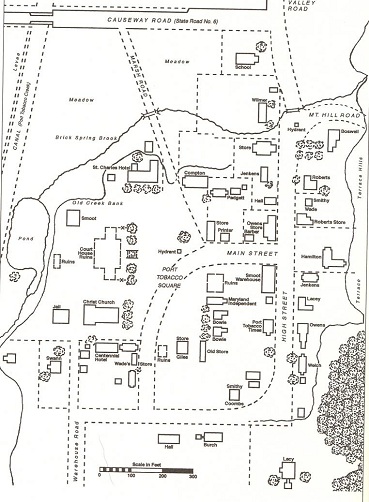 A map of Port Tobacco from the sketches in James Barbour and Anita Gordon’s book.  The St. Charles Inn is at the upper left.

2 thoughts on “The Inns of Port Tobacco”