A portrait of Irene, commissioned by her husband.

On September 6, 1903, Lolith Irene Maddox[1] was born to John Napoleon and Frances Maddox on their farm in Crawford County, Illinois.[i]  Ever headstrong, she managed to leave the farm behind even before she graduated from high school, in search of a better life.  After some time in Vincennes, Indiana, she would spend years in Chicago, until she married and settled in New Jersey.  She would become a writer for Vogue magazine and a true fashionista.  She was, above all, an independent, proud and introspective spirit.

Diane’s early childhood was rattled by the death of her mother at age 5, which left her as the only girl among many brothers.  Late in life, Diane wrote pensively about her situation on the farm.

“I felt like an outsider growing up – my friends were the moon – the stars – the horses and the woods – I loved my family but they were just there – motherless – I really did not understand my femaleness – I was a lone female in all that space – I simply was not functioning in relation to the world as it must have been – I am not certain that I have ever done so completely.”

Irene and her brother Squib.

Although John Napoleon attempted to keep the family together after Frances’s death, by her sophomore year in Palestine High School, Diane apparently was ready for a new life elsewhere.  In 1921, she dropped out of high school and moved to Vincennes, Indiana, where she joined her older brother Jim.  There, she completed her high school education and received her diploma in 1923.[ii]  She eventually went on to attend Illinois Normal School.  She and her brothers were the first Maddox generation to receive a formal public education, something that had been largely unavailable in the United States until the early 20th century.

After college, years before it was the norm for women to work and live independently, Diane took a job with the Ralston-Purina Company and traveled extensively throughout the western U.S. for the company.  In the mid-1930’s, at the height of the Chicago Gangland era, she moved to 4602 Beacon Street in Chicago and took a job with the Singer Sewing Machine Company.

It was in Chicago that Diane gave birth – under the most mysterious circumstances – to her son.

Despite the strongest attempts by her son and grandson, Diane kept the circumstances of her son’s birth a guarded secret even on her deathbed.   Diane used the false name Diane Irene Gaines (her mother’s maiden name) on her son’s birth certificate, and also used a false name and questionable title for the father –Frank Reade Maddox, U.S. Army Private.[2] Also, she claimed a false address – 4526 Malden Street.  Because the relationship was extramarital, and thus somewhat embarrassing (such were the times), Diane was reticent on the topic throughout her life, and the father’s true identity probably will never be known.  David was raised in the foster home of Mrs. Helen M. Oaks in Chicago.

Some years after the birth of David, Diane met Harold Martin Johnson – a research chemist working as Vice President of Nuodex. Inc., a chemical company which invented Napalm, in New York City.  On 7 July 1946 they married at her brother Jim’s house in French Lick, Indiana, and moved to Elizabeth, New Jersey, and later to Union, New Jersey.  Later, he started his own chemical research company in Elizabeth, NJ.[vi]

Her marriage to Harold afforded her a much more affluent lifestyle, reflected in her amazing wardrobe.  She was rarely seen in a mundane outfit, and her closet was filled with avant garde designers’ names.  Her jewelry collection was incredible.  Until little David complained bitterly, even he was dressed magnificently – in Eton suits!  It was in New Jersey that she began writing for Vogue magazine, perhaps propelling her penchant for fine clothes. 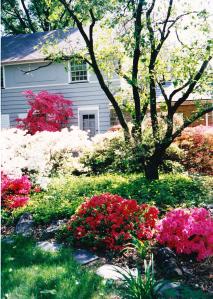 After the death of Harold on March 5,  1969 which did not leave her financially independent, Diane went to work in Saks Fifth Avenue in the men’s accessories department where she became well known to her repeat customers for her ability to combine great fashions.

In her old age, Diane sometimes wrote in her journals about the pleasures of gardening at her Union home.  The front yard was planted with bright-blossoming azaleas and the back yard was centered on a Buddhist statue.  It’s nice to imagine her there, happily tending to the flowers.

Diane succumbed to bone cancer in 1993 after successfully fighting off skin cancer and colon cancer.  Her son David dispersed her ashes from the picturesque Gay Head Cliffs on Martha’s Vineyard — a place she called her favorite.

This family narrative was written and placed online by Narratio Vitae.

[1] Diane employed innumerable variations of her name in official and personal documents.  Her son and grandchildren knew her as Diane formally, but always used the nickname “Buved,” which was short for Beloved.   Her 1903 birth certificate names her “Infant.”  Her father’s hand-written Family History document, presumably written shortly after her birth, names her Lolith Irene Maddox.  She is called Irene Maddox in her freshman and sophomore yearbooks, but her 1923 Vincennes High School transcripts name her Diana Irene Maddox, and she is named Irene Maddox on her 1923 graduation diploma.  In 1938, using a false name to hide her identity, she calls herself Diane Irene Gaines on the birth certificate of her son David (to whom she assigned only a middle initial “M” and no full middle name).  In 1940, she is called Irene Maddox in a letter from her brother “Squib.” In 1945, she uses the name Irene D. Maddox in her father’s will administration documents, but she is called Irene L. Maddox in a Robinson Argus article about her father’s death.   In her 1946 marriage certificate she uses the name Diane Irene Maddox, and thereafter sometimes refers to herself by her married name, Diane M. Johnson.  In a 1969 birth certificate correction, she claimed that her given name was Lolith Irene Maddox.  In a 1986 Social Security number application, she calls herself Diane Irene Maddox.

[2] Frank Reade was the name of a fictional heroic character in a series of dime novels popular in the U.S. at the time; however, there is no way to know if the character was the inspiration for the name.  DNA testing of David in 2009 indicated that his father was, genetically, of Balkan descent.  David would go on to prescribe the name “Reade” as his own first son’s middle name.

Just one example of a Frank Reade dime novel

[iv] David and Ethelmary married on 10 June 1968, according to their Certificate of Marriage, Church of the Little Flower, Coral Gables, Florida – Msgr Peter Reilly officiated.