We’ve previously documented the location of our 8th great-grandfather Cornelius Maddox‘s land called Tatshall in Charles County, Maryland.   A court record from 1684 describes Tatshall as “adjoining to the land called Moores Ditch [aka Moore’s Lodge] at the exterior bound thereof.”

Until a chance encounter today with Charles County historian Anita Barbour Gordon, we did not understand the significance of the Moore’s Lodge location.  From Anita’s description, Moore’s Lodge was the original seat of the Charles County government (1674-1727), and it was thoroughly excavated in 2008 after a century of searches for the exact location.  The results of the archaeological excavation can be seen here.

Important to us, James Maddox (first son of Cornelius Maddox) is featured in the archaeological team’s conclusions.  He bought the original courthouse and jail in 1731.  He salvaged the building materials and then flipped the property to Thomas Hussey’s grandson, John Hanson.

More important than a description of a land transaction is a precise illustration of historically significant buildings that one of our ancestors owned nearly 300 years ago.  The illustration also features a stock for punishing criminals and a grove of peach trees.  It gives a good understanding of the family’s lifestyle at the time.  The Washington Post wrote in 2008 that the drawing of the courthouse is “one of the most famous depictions of a 17th-century building in Maryland.” 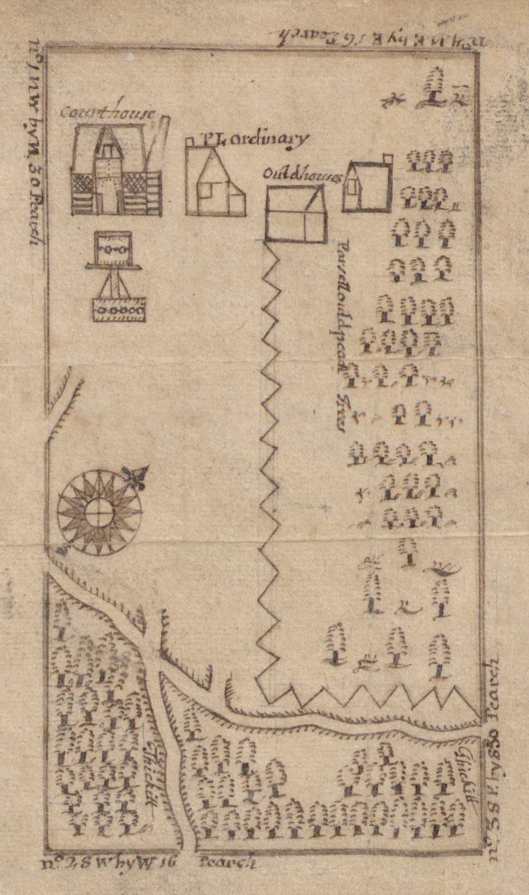 James Maddox owned the above-illustrated Moore’s Lodge courthouse in 1731 and might have operated the ordinary (inn) at that time.  His father Cornelius had owned the nearby Tatshall land tract. (Illustration: Maryland Archives)