The blackpowder shotgun once owned by Joseph Jefferson Maddox (1840-1905)

I have a healthy obsession with the unusual story of Joseph Jefferson Maddox (1840-1905), who fought for the Union during the Civil War, and his brother Benjamin “Wes” Maddox (1835-1913) and uncle Davis Maddox (1822-1898), who fought for the Confederacy.  It’s not just that they were on opposing sides of the Civil War, but that Joseph Jefferson Maddox pursued the very unit that his uncle and brother were part of – Morgan’s Raiders – and actually fought and captured them at the Battle of Buffington Island.

With recent news of the removal of General Morgan’s statue in Lexington, Kentucky, I’ve become more interested in these three uncles.  After a little digging, I contacted Joseph Jefferson Maddox’s great granddaughter, who very kindly relayed a picture of his blackpowder shotgun.  These shotguns went out of fashion with the introduction of the repeating rifle in the 1890s, so it’s old.  It looks like it got some use – perhaps for hunting,  But I have no idea when he might have used it.  During the war?  Unlikely.

It’s nice having a physical reminder of a relative.  But it just encourages more digging.  We’ve known for a while that Joseph Jefferson Maddox enrolled and mustered on 18 August 1862 and fought in the Civil War as a Private in the Union’s proud 3rd Kentucky Volunteer Cavalry, Company A.  What we didn’t know until recently is that he served under Lewis Wolfley, who earned the nickname “Sherman’s Fighting Major” and commanded the unit that chased and fought against Morgan’s Raiders (his brother Wes’s and uncle Davis’s unit) in the summer of 1863.[xix] [xx] [xx.a.]  The 3rd Kentucky Cavalry’s official history indicates Joseph’s regiment went on to participate in the fierce battles of Perryville, Franklin, Murfreesboro, and Atlanta. His records show that he was captured on 14 October 1864 outside of Atlanta – during a month of constant skirmishes against Confederate General Hood’s forces – and he was imprisoned at the makeshift Camp Lawton in Magnolia Springs, Georgia. 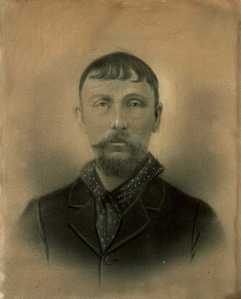 Joseph Jefferson Maddox enlisted in late 1862 as news of Morgan’s Raiders’ exploits were circulating through local newspapers and across the country.  The implication of his enlistment timing is that he might have enlisted specifically in response to his brother and uncle’s Confederate activities.  It’s a story worth more obsession.

1 thought on “A family antiquity found”