“Family War Stories: The Maddox Family Discovers Their Ties to the Civil War”

– Published on the website www.ohiocivilwar150.org in July 2011 for the 150th anniversary commemoration of the Battle of Buffington Island.-

For over a century, and through five generations, the Maddox family has retold the unlikeliest of war stories. I first heard it from a great uncle sixteen years ago.

As the story goes, three Maddox brothers – who had fought on both sides of the Civil War – gathered in an Illinois farmhouse some years after the war and talked of their experiences. One brother explained that his unit had been chasing a Confederate unit and finally caught up with them.  In a pitched battle, he had taken aim at a cavalryman atop his horse and shot at him, but missed and instead killed the horse. Later in the battle he saw the same cavalryman who had found another horse. Determined, the brother took aim at the cavalryman again and fired his rifle, only to kill the cavalryman’s second horse. The cavalryman then disappeared in the confusion of the battle. 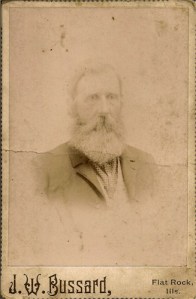 Hearing this story, one of the other Maddox brothers rose from his chair and exclaimed, “You son of a b****, that was me!”

Like most people, I laughed and shook my head when I first heard this story, amused at a harmless legend. I assumed it was the garbled fantasy of previous generations. I was wrong.

The three veterans telling stories in that Illinois farmhouse were descendants of the same Maddox family that had fought in the American Revolution against the British. All eleven sons of my seventh great grandfather enlisted against the British and two died in some of the worst fighting. So there was no question of patriotism among the later Civil War generation, and their family identity was likely strong. Why they would choose to fight on opposing sides during the Civil War remains a mystery, but not a unique situation. History books are rife with examples of brothers pitted against one another in the Civil War.

We came to learn through muster rolls and pension records that great-great uncle Joseph Jefferson Maddox had enlisted as a cavalryman with the Union 3rd Kentucky Cavalry Regiment, and his brother Benjamin Wesley “Wes” Maddox had enlisted with the Confederate 10th Cavalry Regiment, of Morgan’s Raiders. Another great-great uncle, Colby Stevenson Maddox, enlisted with the Union in Illinois, and a fourth uncle, William, enlisted in the Union and died in the war. If the storytelling actually occurred in that Illinois farmhouse, then Joseph, Wes and Colby were the men telling stories.

A raid by Morgan’s men, depicted in Harper’s Weekly

When we first heard the story, we knew little of Morgan’s Raiders – Wes’s unit – and not many Americans do. Their wartime operations, mostly in 1863, were largely an attempt to draw Union forces from their strategic objectives, and are obscured by the enormity of the war’s other events at the time. In the east, Union General Meade had defeated General Lee at Gettysburg on July 13, causing unrecoverable personnel losses. To the west, Major General Grant had defeated the Confederate garrison at Vicksburg by July 4, thus disrupting the Confederacy’s critical Mississippi passage. The Union then committed to eliminating General John Hunt Morgan’s cavalry, who was increasingly making a mockery of Union control of the Ohio region. A victory over the elusive Morgan’s Raiders – who had been showcased in popular Northern newspapers as marauding bandits – would demonstrate that the South had lost its freedom of movement. The North could claim some rule of law in the Ohio region.

Modern tacticians would call Morgan’s Raiders guerrillas. They moved swiftly, with little heavy equipment, and made no permanent gains. Their task was to harass local militias and civilians and to draw the greater Union force into the most difficult type of warfare. After previous successes in Kentucky, in June 1863 Morgan led his troops on a 1,000 mile offensive – called the “Great Raid” – from southern Kentucky through Indiana and into southern Ohio.

Morgan’s Raiders were emboldened by frequent small victories early in the Great Raid, but by July 9, the Raiders – including great-great Uncle Wes’s unit – were being closely pursued by a strong Union force, including the cavalry unit that great-great Uncle Joseph belonged to, according to battlefield histories. Joseph certainly would have known that he was pursuing his own brother’s unit. There would have been ample opportunity for the kind of sniping described in the brothers’ war stories. So the fantastic family legend may have some truth to it. But it was at the Buffington Island Ford, near Portland, Ohio, that the brothers would have a run-in of Shakespearean proportions.

We do not know exactly what happened. We know from partial war journals that the Union pursuit of Morgan’s Raiders reached its peak on July 19. The men on both sides were ragged, stinking, overheated and exhausted after a week of sleepless horseback pursuit. The Raiders slowed as they attempted to cross at a ford over the Ohio River toward the relative safety of West Virginia, and the Union cavalry and a gunboat opened fire on them. Over 700 Raiders were captured by great-great Uncle Joseph’s unit. Among those captured was Joseph’s own brother, Wes.  As a result of his brother’s actions, Wes would spend the last two years of the war in one of the most atrocious prison camps of the war – Camp Douglas in Chicago, where one in five prisoners died of disease, famine, cold or abuse.

A beautified depiction of life at Camp Douglas, from Harper’s Weekly.

While I, too, would rise from my chair and call my brother a son of a b**** for shooting at me (twice), I think I would have equally strong words for a brother who sent me to a deathly prison camp. One imagines Wes, shivering in his threadbare uniform in the terrible winter of 1864, cursing his brother’s name. Unfortunately, family history does not relate Wes’s prison camp experience in any detail, but later generations would express their greatest respect for his wartime action and even exaggerate his exploits. I only wish I could’ve been with the brothers in that Illinois farmhouse after the war to hear the whole story.

9 thoughts on “A Civil War Story”