We’ve established that our 9th great grandfather lived in southern Shropshire, England, before emigrating to Maryland in the mid-1600s.  As we begin to dig into local Shropshire records in search of more data and stories, it’s useful to place the family in the historical and etymological context of Shropshire and their presumed earlier home of Wales.

Madog/Madoc is the original spelling of our name, as used in Wales as a forename by ethnically/culturally Welsh ancestors at least as long ago as the 6th century.  Saint Madoc established a monastery in the 6th century at the eponymous Llanmadoc, on the Gower Peninsula, but that doesn’t mean he was the first Madog/Madoc in the area and it doesn’t give us a clue to the earlier origins of the name.  One writer has made a speculative claim that Saint Madoc’s DNA is similar to DNA found among the Gaulish Medulli people, including a Medulli group that lived in Medoc, France.

The Madog/Madoc lines in Wales are famous for their short-lived kingdoms and their rebellions against Norman and English invaders.  Kings bearing the Madog name had a part in the establishment of the Powys kingdom after the Romans left Wales in the 5th century, and kept the Powys kingdom going for centuries.  Our known 17th-century ancestors might have descended from Powys’s Mathrafal dynasty, which included the 12th-century founders of the Powys Fadog kingdom (Fadog means Madog) and the Powys Wenwynwyn kingdom some decades later.  These kingdoms once held the majority of Wales and parts of Shropshire. The Powys Fadog kingdom was politically centered on Dinas Bran and spiritually centered on Valle Crucis.  The Powys Wenwynwyn kingdom included Munslow, Shropshire, where our Edward Maddox lived in the 17th century.  Perhaps the Powys Wenwynwyns deposited Edward’s grandfathers there. 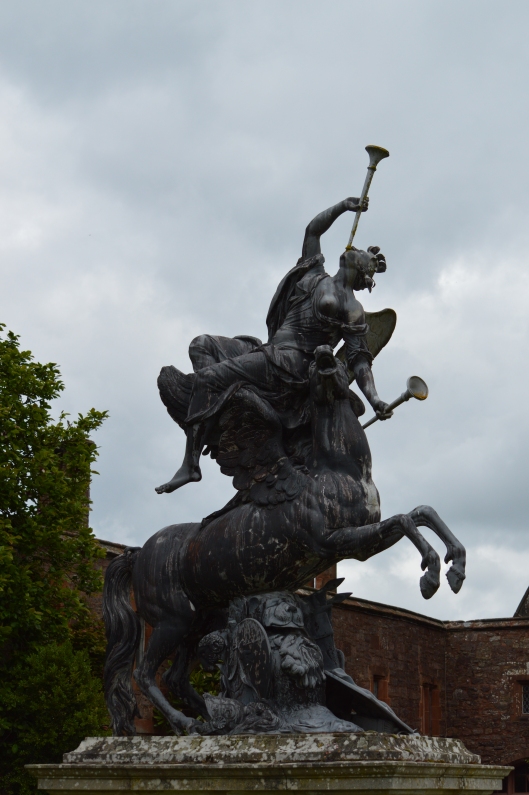 Castle Powis in Welshpool, Wales, was originally owned by the Powys Wenwynwyn line.  It is now the property of the Earl of Powys.  The castle is open to the public and includes art and objects stretching into the 15th century.  We took the above courtyard photo during a tour in 2017.

The Powys Fadog kingdom fought with the Gwynedd kingdom to the north, which included numerous prominent Madog/Madoc relations.  The Gwynedd kingdom would defeat the Powys Fadog kingdom in the 12th century.  The most famous Madog/Madoc to come from the Gwynedd line was Madoc ab Owain Gwynned, who legendarily sailed to the American continent in the 1100s, and whose descendants would purportedly be found living among Native Americans in the 1600s and speaking Welsh.

When American Maddox researchers claim ancestry in Wales via 17th-century Maryland and Virginia colonists, it’s usually a claim to the Maddoxes of the Powys Wenwynwyn kingdom, whether the researchers know it or not.  This claim was propagated by Fredonia Maddox Webster in the first four pages of her 1957 book, The Maddox Family of Maryland.  She relayed a romantic British description of the Madogs of Llanfrynach (a few miles southeast of Brecon), whose ancestors rebelled against the Crown before being reduced to minor local nobles.  Webster’s four-page genealogy of the Madogs of Llanfynach begins with King Arthur and ends with John Maddox, progenitor of Maryland colonist Samuel Maddox.

Many hopeful family historians have claimed that their Maddox line includes a Thomas Maddox, who settled near Jamestown, Virginia, in 1620 and died by 1623 (possibly due to injuries after the Indian Massacre of 1622).  They claim that this Thomas is identifiable with “Thomas Lord Scethrog,” and again they refer to Webster’s book, even though Webster writes that Thomas died in 1620.  Webster claims that Thomas Lord Scethrog was the father of John Madog, who was the father of Maryland colonist Samuel Maddox. One researcher has found a 1607 gravestone for a “Gwladis, married Thomas Maddock, Lord of Scethrock” in Saint Meugan’s Church in Llansantfraed, providing perfect evidence for a geographic location… if only the genealogical link to the Maddox colonists could be proven. But so far it has been impossible to actually document known Colonial ancestors into the royal Madog/Madoc lineage in Llanfrynach.

While hopeful Maddox family historians may claim links to Fredonia Webster Maddox’s 16th-century Madogs of Llanfrynach, our own Maddox ancestors were living 60 miles to the northeast in Munslow, Shropshire, at that time.  Our Maddoxes were geographically closer to the extraordinarily beautiful Powis Castle, where the last of the Powys Wenwynwyn heirs lived in the late 13th century.  But the illegitimate son of the last Powys Wenwynwyn prince sold the castle to the Herbert family soon thereafter.  The Madogs of Powys Wenwynwyn were dispersed throughout the modern area of Powys. 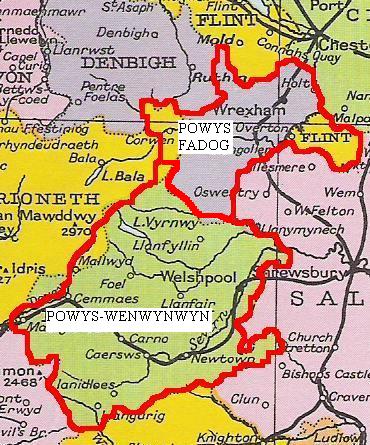 The name Madog did not originally serve as a static surname.  It was a forename. Parents could name their sons Madog for many reasons, and the use of the name didn’t necessarily mean a blood relationship to any of the Madogs that came before.  For this reason, not every Madog in Wales should be considered a relative.  One researcher provides a deeper explanation here and another expresses frustration here.

For over a millennium, the ethnically/culturally Welsh used the Madog forename as a patronymic, meaning that a man would identify himself with his father’s name (or rarely his mother’s name).  For example, Madog ap Dafydd meant Madog son of Dafydd.  A woman would use matronymics, placing the term ferch (daughter of) before her mother’s name.  This was intended to establish genealogy for legal proceedings, but records and genealogies among the ancient Maddoxes are few and questionable.

While Welsh ancestors called themselves Madog/Madoc, ethnically/culturally English ancestors just to the east simultaneously spelled their name Madocke/Maddocke, based on a study of thousands of 16th-century records.

The use of patronymics generally ended in 1536, when Henry VIII passed the Act of Union, which put an end to the tradition in favor of Anglicized surnames.  Some families then incorporated the ap at the front of their surnames.  For example, the Rice surname became Price.  Other families added a possessive s to the end of their surname.  For example, Jone became Jones.  In England, Madog/Maddock became Maddocks/Maddox.  But the Welsh continued to use Madog/Madoc.

The transition to Anglicized surnames in the mid-16th century can help us establish geography and distinguish between families.  Our known ancestor Edward Maddox and his children used English spellings as early as the 1640s in Munslow Parish baptismal, marriage and burial records, implying English cultural/ethnic identity.  This could also imply an eastward aspect: they probably had been doing business with the English, whose centers of commerce were to the east toward London.

Among the intriguing records we’ve already found in the Shropshire Archives is the 1630/1 will of John Everall of Wentnor, Shropshire, referring to his son Edward Maddox and his grandson Edward Maddox.  The dates match our Edward Maddox’s chronology, location, and son’s name in Shropshire.  But why a man with the surname Everall would have a son and grandson with the surname Maddox is… confusing.  But if we reverse-engineer Everall’s name into his original patronymic (for example, the name Evans was originally ap Ieuan), we see that he might have been called ap Iarll before surnames were fixed.  Ap Iarll translates to “son of Earl.”  Perhaps – just speculation – he was derived from the Powys Wenwynwyn royal line, and had a complex series of wives and children, as many of the royals did.  Or maybe the story is much more basic.  Lots more work to do.

5 thoughts on “A primer on the Maddoxes in Wales”